Welcome to part 2 of the Greddy Emanage install. In this section, I will cover the support tool, injector harness, timing harness, and a little software information. That’s a lot to cover so lets dive in.

Now that the primary install was complete, it’s time to hook up the laptop and support tool. Originally I was getting errors on the E-Manage whenever the car dipped below 1000 RPM. Once I updated the Emanage with Version 1.39 from the Emanage Yahoo Group it was fixed.

At this point I also changed the correction points for the dial adjustments. Rather than having it start at 2000 RPM, I set it to start at 1000 RPM. Also in the software I set the MAF so I would not get any fuel cut at higher RPM. I did this by using the BC or boost cut setting and set it to 4.85 across the board. Realize this helped smooth out the car, but I still could not get on it without detonation. I couldn’t upload the file so below is a screen shot. 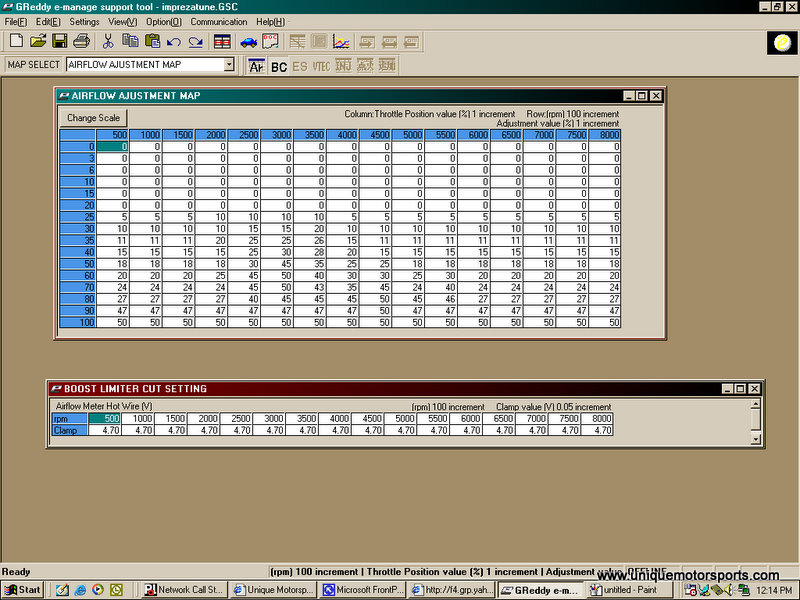 At this point you should also be comparing this to your ECU pinout and the instructions in the E-Manage guide.

Remember my colors might be different for the injector harness since I used extra wires from the ignition harness. These wires were simply spliced in which made for a rather non intimidating install. This is how I hooked it up.

It’s a lot of wires, but once you setup the MAF it gets easier.

Now that the Emanage is installed with the Injector and Timing Harness it’s time to do some more tuning.

To start I set all the airflow settings back to zero and disconnected the RRFPR. (I won’t be needing that anymore) I then set the software to “Map Trace” which is does in real time. I would strongly recommend some help at this point so you don’t smash into something while staring at the laptop. I did this about 3am so traffic was pretty light. I did some test runs and would highlight where the adjustments needed to be. I then would pull over, adjust, update and go for another run. As I slowly got faster and faster, I would add more fuel when the Air/Fuel gauge went flat and pull timing if I felt the car was about to detonate (or hear it).

After a few hours I was able to get the car quite drivable without any signs of detonation. For engine safety reasons, I have it set to rich under boost and timing is pulled quite conservatively.

I would not recommend the way I tuned it, but it’s all I could do for the moment. With a proper wideband o2 and knock detection I could modify the fuel and timing curve to extract more power. I expect to get about 15-20hp with proper tuning.

OK, so that’s basic tuning, now lets get more involved. There are two main areas that you will be tuning with the E-Manage; fuel and timing.

The best way to tune these would be a dyno, some kind of knock sensor and a wideband o2 sensor. All of those items can set you back quite a bit so here is how I’m doing it on the cheap.

Wideband: You can pick up a wideband starting around $300. Once you have it, you can compare wideband readings to the real time display and get some great maps. For my particular case (when originally installed) (2.2 n/a engine with 9.5:1 compression) I will be running lean during freeway for good gas mileage and about 11.5:1 under boost. You can also get by with a narrow band, but you will need to err on the side of rich. I did this originally on my 2.0 and tuned up to 17psi. When a wideband was hooked up, I only had to take out about 2-3% of fuel anywhere in the curve. Not bad for a $60 meter.

Knock detection: When modifying the timing you will want to back off about 3 degrees if you hear any knock. If that fixes it, then put back 1 and listen closer. You want that degree of safety for hot days and bad gas. Realize though, you will lose some power for every degree taken out, so taking out excessive timing will make for a slow ride. You should be tuning this at night when it’s nice and cool and then in the daytime go back out and do some testing to make sure it’s still ok.

I don’t really know what all is on the market for knock detection. I have seen a few nice items that have a meter similar to a standard air/fuel gauge and those are nice looking for sure. Last I checked though they ran about $300. Given the importance of good knock detection, this is not a step that should be overlooked. Some more research might get you a good portable knock detector for about $20. You will need a subscription, but if you are installing an E-Manage, you should already be a subscriber.

If you notice any errors or have any suggestions, questions or otherwise, please email or message me.