Installs, like a lot of things in life; the only thing certain is uncertainty. In fact, planning on something going wrong or something holding you up is how I go into pretty much any install. Sometimes it’s something minor… other times… well, this was not one of those other times.

This is the first of a couple installs that night so I pretty much just dug right in. Half shaft installs on an Impreza are pretty straight forward.

1. Loosen large nut holding the half shaft to the knuckle. This can be done with a 32mm socket, long breaker bar. You will need to uh… put your back into it as they say, this will be tight.

2. Lift corner you are working on.

5. Remove the bolt that holds in the ball joint or the nut holding the ball joint to the control arm. I usually remove both and let the car choose which is separated.

8. Once separated you should have enough movement to pull the knuckle out of the way. This maintains your alignment as well since you are not unbolting the strut.

9. The inside where it goes to the transmission will either pop out or have a pin which you will need a punch to tap out.

Pretty much as easily as you read this, is how the install went. Once the shaft was pulled, we compared it to the replacement… to find the wrong part DOH! 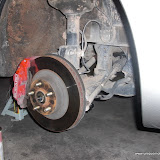 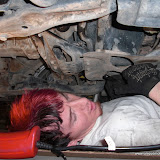 A little tight, but I make it work 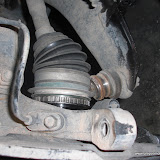 Ball joint popped allows the knuckle to lean out and therefore removal of the half shaft. 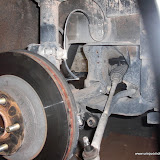 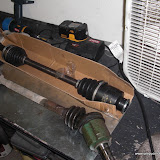 Old vs new… now if only they were the same.