In Part two of the series we do a little more advanced modifications.

Race Cat: Having a CAT right after the exhaust manifold is great to help your car warm up and fight cold start emissions. It’s not so great for good exhaust flow. Here are some pictures and results of replacing the Cat with a straight pipe. I also did some light porting of the exhaust manifold, most of which was on the outside to remove casting marks. 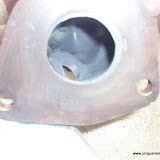 Looking in from the bottom 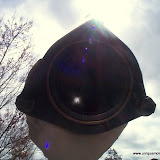 Note the lack of airflow 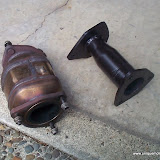 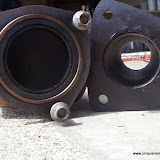 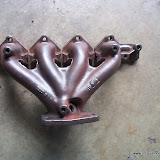 Before shot of exhaust manifold 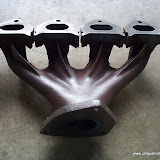 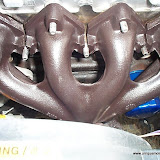 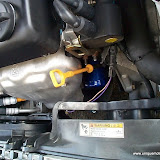 Installed, nice and stealthy… as long as the car was off

UPDATE: The “race cat” causes a CEL and has since been replaced with the stock CAT.

You might notice that even after all of this exhaust work, the car does not seem to want to go any faster. I suspect the reason is the 2″ opening into the air box. In other words, the car can exhale, but it simply can not get enough air in to make more power. That said, the air box is the next focus of this write up.

Air Box: Phase two of the air box modification involves cutting off the factory pickup and enlarging the hole. The goal is to get the box opening about the same size as the hole in the fender. This can be done with a Dremmel, or you could use a RotoZip type tool. Here are the results and some pictures. 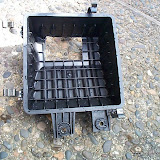 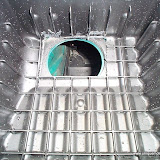 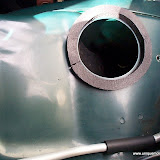 Since the last writing, the air box opening has been enlarged and a Cold/Ram air pickup running to the front bumper has also been installed. There is also an air dam on the car which doesn’t do much for straight line acceleration, but helps keep the car stable.

RESULTS: So what happened? I am getting a much cooler air into the air box and if it’s true that every 4C the air is cooled, there’s about a 1% increase in power, then I should have about 3% more power now. Well, the preCat was put back on the car due to a continuous Check Engine Light. I suspect that at higher RPM’s there is just not enough exhaust flow.

E-Tech Mod: There is a common Daewoo mod known as the “E-Tech Mod”. Claims such as “50% more power increase” sound too good to be true, but are they? In short, yes. While carrying out the previous testing, I decided to tie up the intake valve as the “E-Tech Mod” pages describe. I have always been skeptical, but now I have actual data.

Results: Half a second slower on both accounts, hardly worth it if you ask me.

Cold Air Pickup: Well since this write up the intake has been modified more with a ram air setup that goes from the fog light cover to the airbox. Mounting it required enlarging the hole in the fender under the airbox a little more and simply removing the foglight cover. Once I did that a dryer tube shoves the air from the fog light hole into the airbox. There is also a space between the airbox and the tube to allow for a “backup source” in case I go through deep water and to help protect from the rain. It does rain a lot in Portland…

Choco Chip from Daewootech: Get this mod. It works, I didn’t record a large difference but it was near freezing the day I tested it. Not only that, but I think I have other limitations on the car keeping it from having more power.

Exhaust Reducer: There is a spot on the exhaust right after the 2nd CAT where it goes from a 2.5″ to 1.75″ and has no reducer. I noticed this when I took off the exhaust and there was a half inch ring of black all the way around. I picked up a few reducers at a local autoparts stores and mounted it up. This allowed me to pick up an extra inch in exhaust flow. What I mean by that is you can have your hand 14 inches behind my exhaust pipe and feel the pressure. Exhaust velocity = power so this is a good thing.

Grounding Kit: I originally thought this was dumb, but after trying it on the Impreza, I’m impressed. Better throttle response, smoother running engine, and the lights don’t dim when the stereo hits. I haven’t done it yet on the Lanos, but it’s something that can be done well for less than $20.

That’s it, unfortunately I seem to be tapped out of low dollar mods to extract more power out of the little 1.6L. The next step in my opinion is to replace the entire intake manifold with one that flows a little better. This will get rid of the E-Tech, but a properly tuned intake manifold could get some good results. Porting the head might do something, but it depends on the original head design. I have never removed it, so I don’t know. Another option is boost.